In case you haven’t already seen this, it’s been discovered that gunsights on weapons used by British and American forces in Iraq and Afghanistan are inscribed with coded biblical references, including:

Again Jesus spoke to them, saying, “I am the light of the world. Whoever follows me will never walk in darkness but will have the light of life.” (John 8:12)

For it is the God who said, “Let light shine out of darkness,” who has shone in our hearts to give the light of the knowledge of the glory of God in the face of Jesus Christ. (2 Corinthians 4:6) 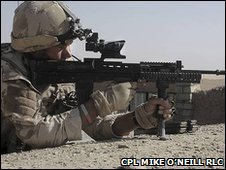 It’s absolutely mind-boggling to me that carved onto weapons of war are words of truth and peace, words from a man who embodied and heralded a kingdom characterized by peace, and from a man who announced an alternative to empire and spoke of faith, hope, joy, gentleness, goodness, and peace. How in the heck do these things go together?!

On the website of Trijicon, the US-based manufacturer, it states: “We believe that America is great when its people are good. This goodness has been based on biblical standards throughout our history and we will strive to follow those morals.” Which of course is clearly congruent with SHOOTING people.

No wonder Christians have a bad name. You’d think we’d learned our lessons from the Crusades, the Inquisition, etc. But apparently not.

UPDATE (Jan 20, 4pm EST): If you’d like to sign a petition asking the Pentagon to stop using weapons branded with Bible verses, you can do so here.