[Part 2 of a blog adaptation of the October 28 message at The District Church: “Jubilee.”] 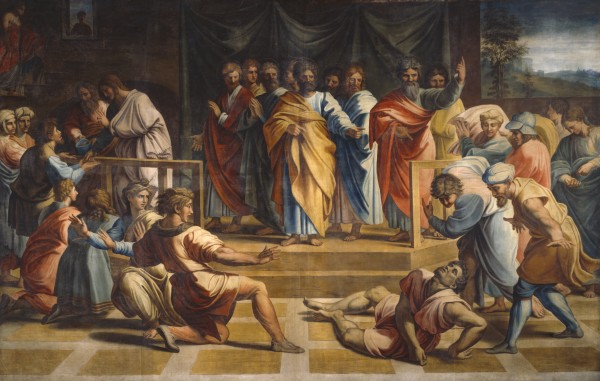 After Acts 4–after the heady hope of the Jubilee community, after the generosity and selfless sacrifice of Barnabas–we move into chapter 5, and we run face-first into reality. Ananias and his wife Sapphira sell a piece of property, keep some of the proceeds and bring the rest to the apostles, while pretending to bring all of the proceeds from the sale. They are found out, and as a result, they both “fell down and died.”

It’s a troubling episode for many of us–it seems awfully harsh! But Luke doesn’t just explain it away; he doesn’t paper over the sin in the community, nor over things that freak out the early church community (and us!). It’s really important that we see things like this, that we’re reminded that God isn’t just a kindly old man, God is not your buddy or your pal. God calls us his friends, God invites us into his family, God is our Father; but it would be folly to forget that he is still God.

Take electricity for example. It’s a potent thing: it can run your laptop, charge your phone, power the cell towers that allow you to stay connected with people; it runs cars and buses and trams and trains; it brings light and heat to our homes and cities; it allows us to store and cook food, to wash dishes and clothes; it enables us to watch or listen to or play with all kinds of entertainment. But if you’ve ever experienced electric shock, you know it’s not a pleasant experience—it makes sense to me now why my childhood nanny freaked out when I tried cutting through a power cable with a pair of scissors. And if you’ve ever seen the power of a lightning strike up close, you know that it’s not to be trifled with and that if you do, you’re going to get hurt. Did you know that the temperature of the air around a lightning bolt is over 50,000 degrees Fahrenheit, six times hotter than the surface of the Sun? You don’t mess around with that stuff!

One of my favorite lines from C.S. Lewis’s story, The Lion, the Witch and the Wardrobe, is when the children are told that the great Aslan, whom they’re about to meet, is actually not a man, but a lion; and so they’re naturally a little nervous about meeting him.

So we should always remember—we need to always remember—that God is not to be treated casually. God is not just someone we can make in our own image—no, we are made in his: God, the Holy One, the Creator of the heavens and the earth, so glorious that when Moses asked to see his glory, in Exodus, he says, “You cannot, for no one can see me and live.” He wasn’t saying, “I could show you but then I’d have to kill you,” but rather, “There is such a gulf between you and me that you wouldn’t be able to handle the fullness of my glory.” Think about that! This is the God that Ananias and Sapphira were treating so lightly; they had forgotten what it was all about, who it was all about.

Which brings us to what I think is the root of the problem here in Acts 5 and what I think is one of the most potent poisons known to the people of God–to the Jubilee community: pride, that which C.S. Lewis called “the great sin.” In Mere Christianity, he wrote:

Pride gets no pleasure out of having something, only out of having more of it than the next man. … For Pride is spiritual cancer: it eats up the very possibility of love, or contentment, or even common sense.

According to Jesus, hypocrisy is not just the failure to live up to what we aspire to. Everybody does that. The core of hypocrisy is deception—mean-spirited and selfish, although sometimes even unconscious, deception. (Who is This Man?, 122)

We can think of any number of scenarios involving hypocrisy: the politician who rails against corruption and who herself is caught in a bribery scandal; or the priest who speaks of a God who loves children while himself abusing them; or the pastor who preaches about the sacredness of marriage and is discovered having an affair.

I often read these stories, particularly about the ones that happen within the church, and at first, I react in the same way as when I read the story of Ananias and Sapphira, with righteous indignation, with incredulity, with a pitying shaking of the head.

And then the Spirit of God sort of taps me on the shoulder and reminds me to take the plank out of my own eye, reminds me that I have a tremendous capacity for self-deception, convicts me for the sin of pride, for looking down on others when only God has the right to judge. And it is when I humble myself—for humility is the opposite of, indeed the antidote for, pride—that God gives me compassion when I look at others and grace when I look at myself.

My parents actually gave me the middle name, “Barnabas.” And I want to be like him: I want to be uncomfortably, sacrificially generous; I want to be part of this Jubilee community; I want to be so in love with God and such a part of the body of Christ that I make decisions that might not make sense to the rest of the world.

But I acknowledge that often I make decisions with ulterior motives—in fact, nothing I do is ever completely pure. Did I serve on this occasion because I love serving or because I love the recognition that comes with serving? Probably both. If no one knew that I had served, would I still do it? Probably, but maybe a little more grudgingly. I acknowledge that my so-called ‘sacrifices’ are nowhere near as costly or as heartfelt as the sacrifice of my Lord deserves. I know my life will not always match up to what it’s supposed to be, and sometimes it won’t even be facing the right direction.

Pride takes all sorts of different forms, and I’m pretty sure that we all struggle with this sin in some way:

I want to encourage you to trust in Jesus Christ: he isn’t safe, but he is good.