At the first session of The District Church’s discipleship class, I began by posing the question,

How many of you know that we’re called to be like Jesus?

Everyone raised their hand. I followed up:

How many of you actually think that’s possible?

We dug in a little further and discovered that many of us had this notion that disciples were the upper tier of Jesus-followers, with a higher level of commitment, a greater willingness to sacrifice, those who had answered not just the primary call of Jesus to believe he existed but also the subsequent call to do what he said. Ordinary Christians were just trying to figure out what to do on a day-to-day basis, let alone the call of discipleship!

Yet the first call of Jesus isn’t a cognitive-intellectual one, but a holistic, expansive, all-encompassing one, condensed into two words: 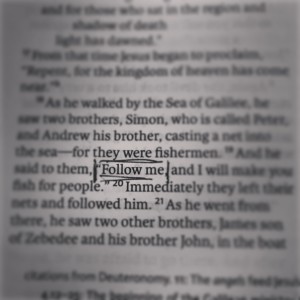 I’m not going to unpack what Jesus calls us to in this post, but there’s a foundational adjustment to be made simply by understanding what a disciple is. As the late, great Dallas Willard wrote,

A disciple [of Jesus] is a person who has decided that the most important thing in their life is to learn how to do what Jesus said to do. A disciple is not a person who has things under control, or knows a lot of things. Disciples simply are people who are constantly revising their affairs to carry through on their decision to follow Jesus. [emphasis added]

The Greek word for disciple is mathetes, meaning “learner.” By definition, a “perfect disciple” is one who is always learning. This flies in the face of our Western understandings of perfection (derived from Ancient Greek philosophical concepts of the ideal) as something that is unchanging and to which nothing can be added.

This perspective is damaging in that it causes us to think that as disciples of Jesus, we’re called to be perfect, i.e. never make mistakes, rather than perfect disciples, i.e. always learning from our mistakes. Philip Yancey wrote of (the also late, great) Brennan Manning,

he progressed not by always making right decisions but by responding appropriately to wrong ones.

This is true in the way we live our lives, in the way we relate to other people, in the way we raise our kids, in the way we work with one another–it’s not about doing everything right; it’s about responding well when things don’t go right, about always having an attitude that seeks to learn and to grow and to continue to be formed more and more like Jesus.

Being a disciple of Jesus takes time and intentionality and cultivation. Just like Babe Ruth couldn’t hit a home run the moment he was born, but grew in strength and ability and through training; just like Steve Jobs didn’t know how to program a computer from birth, but spent hours and hours experimenting and playing around with code and trying things out; even in Jesus’ case, we’re told that he “grew in wisdom and stature” (Luke 2:52) … if the Son of God had to learn things, I shouldn’t be surprised that I do, too.

Being a disciple of Jesus is possible. It’s not some out-there achievement for the A-grade students, the ones who are supernaturally wired to accomplish things; it’s for anyone who decides to accept Jesus’ invitation–“Follow me”–and allows more of Jesus’ Spirit to live in and through him or her.