I learned something new this week, a detail that blew up something I had been sure of since I first learned it, 20 years ago. [This may not be a big deal to you, but it was to me.]

There’s a story in the Old Testament book of Judges, about a man named Gideon. He lived at the dawn of the Iron Age, around 1200BC, in northern Israel–this was after the time of Moses but before the time of King David. At the time, the people of Israel were being subjected to constant raids by the Midianites, a tribe of Bedouin nomads, so much so that the people of Israel were driven to find shelter in the mountains.

God calls Gideon to free the Israelites from the oppressive grip of Midian, and so Gideon calls the people to arms–32,000 of them respond.

Maybe you’ve heard this part before: God says, “That’s too many. If you win with that many, you’ll think it was your effort and your strength that saved you.” So he directs Gideon to send home those who are afraid, and 22,000 leave.

Okay, that’s less than we thought, but that decision makes sense, right? We don’t want the scaredy-cats, the ones who might turn tail in battle; we want the fearless, the ferocious.

But God says, “That’s still too many. Let’s take them to the water and I’ll help you make this crew a little smaller.”

And here’s where my mind was blown.

See, the lesson I was taught in Sunday school many decades ago was that Gideon picked the ones who were alert, the ones who didn’t put their faces in the water. That’s what we find in the NIV:

“Separate those who lap the water with their tongues as a dog laps from those who kneel down to drink.” Three hundred of them drank from cupped hands, lapping like dogs. All the rest got down on their knees to drink.  (Judges 7:5-7, NIV)

Logistically, though, everyone has to get down on the knees to drink from the river, whether you use your hands or not, right? And to me, this is the image I have of dogs drinking: 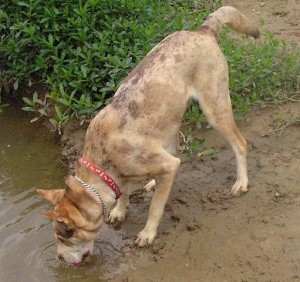 The image I have of someone who laps the water like a dog is one who’s on his hands and knees, maybe even on his belly, scooping water to his mouth as fast as he can, maybe even dunking his head in from time to time because he can’t get it quickly enough.

So maybe those who lapped the water actually weren’t the more alert ones but the less alert ones, the ones less conscious of their surroundings, the ones who were simply concerned with getting a drink. This is reflected in another translation:

One commentary puts it this way:

The original distinction must have been between those who knelt and drank from their hands, and those (the 300) who put their faces to the water and lapped like dogs. Thus, it was probably the most unlikely who were chosen, to make it even clearer that the victory was no human achievement. (IVP New Bible Commentary)

Remember God’s reason for culling the army in 7:2? “Israel would only take the credit away from me, saying, ‘My own hand has delivered me.'” So God cuts the army from 32,000 to 300. That’s 0.9% of the original fighting force, against the might of Midian, whose number is “like locusts.” (And this is not the 300 Spartans we’re talking about. Not even close.)

It might be instructive also to look at the story of Gideon’s call in chapter 6, or at least Gideon’s response to being called. He said,

“Please, Lord, how can I save Israel? Behold, my clan is the weakest in Manasseh, and I am the least in my father’s house.” (Judges 6:15)

Siding with the poor and the oppressed and the weeping and the hungry and the outcasts.

Moses the exiled standing up to Pharaoh and the might of Egypt and leading the people of Israel out of slavery.

Achieving victory with an uncertain Gideon and the fearful and underresourced 300.

Defeating a ferocious giant with David the shepherd boy and one smooth stone.

God becoming a human baby born into poverty, living as a carpenter in obscurity for most of his life, then dying a bandit’s death on a Roman cross … so that sin and death might be defeated.

I don’t know why I’m still surprised. But God has a way of doing that, especially by shaking up things I thought I knew.

Therefore, to keep me from being too elated, a thorn was given me in the flesh, a messenger of Satan to torment me, to keep me from being too elated. Three times I appealed to the Lord about this, that it would leave me, but he said to me, “My grace is sufficient for you, for power is made perfect in weakness.” So, I will boast all the more gladly of my weaknesses, so that the power of Christ may dwell in me. (2 Corinthians 12:7-9)

5 Replies to “Drinking like dogs (or, How God works)”

Yesterday I misspoke at @christcitydc: I said it h