Watch Arsenal beat Chelsea in the FA Cup Semi-Final and the Mariners sweep the Tigers: …

Finally, go support the movement to free Iranian-American journalist Roxana Saberi. You can do this on twitter (@freeroxana) and Facebook. And for more information on the story, check out this BBC news article.

So it’s been awhile since I let y’all know what’s up—since Seattle, I’ve been busy finishing off my summer class assignments and exams, which I did on Tuesday of last week. So it’s been a week since I got done.

Since then, I’ve been trying to recover from the year. It’s been long and hard, and I’m worn out. My body and spirit are tired—not just in the way that will be remedied by a good night’s sleep, but on a deeper level: I feel tired in my very blood stream; I’m BONE tired. And I’m not quite sure how to remedy it, or whether or not I’ll be ready for the new school year to start in six days’ time.

Seattle
I was in Seattle for a week, from August 25 to September 1. I had a great time, catching up with Hannah, Phil and Jason, people I hadn’t really seen in years.

I hadn’t been to Seattle since Christmas 1992, when I was ten, and it was cool to walk the streets of a city for which I have much affinity but (if you think about it) not much reason to have this affinity. There was a part of me that really felt at home in the Pacific Northwest, with the mountains, the trees, the various lakes, the beautiful port of Seattle, the cooler climate, the drizzle.

For the most part (six days out of seven), it was warm, sunny and breezy. And I commented more than once that if the weather was like that the whole year round, I might consider moving. But it’s not. So I’m sticking to California for now …

But I only have so much time to write about life, and if you want to know more about these things … ask me.

If any path had been different
I often wonder about the journey that God has led me on; it’s been, at times, long, tortuous and trying, while also being a wonderful process of learning and loving. I think about how things could have been different if I’d made different choices, or if something or other had worked out differently …

Oh, what I could (have) be(en). I could (have) end(ed) up: actor, rockstar, lawyer, novelist, professional athlete, cop, politician, pastor, doctor, teacher; in London, Morocco, Hong Kong, Seattle, Texas or DC.

Sometimes, I look back. And then I look forward. And wonder where I’m going. Time will tell, I suppose. Right now, I feel like a running back, waiting for the right gap to open up in the opposition’s defense so I can go for it and really hit my stride. But the right gap is taking its time to open up at the moment, so patience and perseverance are a constant prayer request.

Hey y’all, I’m writing this blog from my hotel room in Aurora, CO. I’m halfway through my 8-day trip for Tim and Tiff’s wedding, which takes place on Friday. The temperature’s been consistently in the high 80s/low 90s and the weather’s been consistently sunny. Anyhow, in the few days I’ve been here, I’ve:

But I think a turnaround is in the works. Something about being here, out of the routine grind of Pasadena life, without work or class responsibilities, being with an old friend, just being able to enjoy life, being able to pray with Tiff, going to church, helping out at Sunday School, going to church again; something in me is ready for a return to full relationship with my God and King.

Being at Scum was invigorating—it was the kind of church I think I would want to be a part of: church that is honest, where the music is not over-produced but still polished, where the sermons are coming together to address real life, not simply talking in abstracts. It made me realize how much I really did miss regular communion with a community of faith—I’m still visiting churches in CA and will continue to do so until some time towards the end of the summer—just as spending time with Tiff and Tim made me realize how much I missed the comfort and companionship of old friendships. 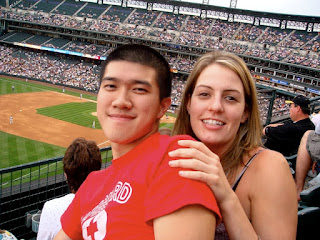 I know that when I go back to California, things won’t be the same: my friends from London will have gone back to their lives in London and I’ll go back to work and class. But this downtime (well, as much as pre-wedding time can be downtime) feels like a kickstart. A much-needed kickstart.

Right … back to editing this best man speech of mine.