I realized that I forgot to blog about one of the events of the last couple weeks … I met someone.

Seriously, the event was, of course, David Beckham’s debut for the LA Galaxy in a friendly against Chelsea last Saturday. My friend Micah was generous enough to get me a ticket for the game (for my birthday), and so I went with him and Christie, and his dad. It was okay … 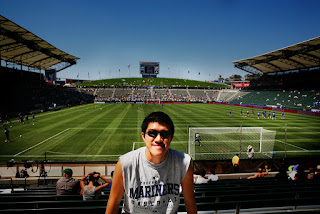 Who am I kidding? It was awesome! I got to see Becks, and Landon Donovan, and all the Chelsea players (though I would’ve preferred it if it was Arsenal, and Henry hadn’t left). And, Posh and Katie Holmes were in the box behind us, so we saw them, and … I was fairly excited the whole time.

I really hope he raises the profile of soccer in the States—it was the first sellout that the Galaxy had had in a while, and the highest rated soccer match on ESPN, so there were some positive signs. But at times it felt more like a spectacle than a soccer match, solely focused on Becks. I think, for the game to take off, people are going to have to see it as a viable career and a credible sport to keep playing after high school.

As for me, until I get my fitness back (which I hope will happen soon), I’ll keep putting my beaten-up body out on the pitch once a week (and twice a week in the summer) to kick around with Fuller folks. One of my friends invited me to try out with him for a semi-pro side, but until I can offer more than a hard sprint every two minutes, I’m going to pass.

On another front, the first lot of Fuller folks whose admission I helped process (coz I work in the Admissions Office, for those of you who don’t know) started at Fuller this summer. I’ve been at Fuller for coming up to a year now, and I feel like part of the old guard, watching all these newbies come in, excited and looking forward to their time here.

In many ways, it’ll be interesting to see what happens over the next couple months—to see how new friendships form and new relationships (there are always new ‘special friends’ popping up), to see what friendships last and which ones don’t. It’s been interesting, and a little sad, to note that of the people I hung out with the most when I first started at Fuller, I only still hang out with two of them. 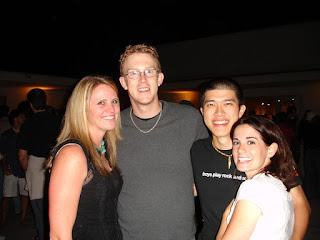 [
At the end of my first week at Fuller, with Rachel, Stephen and Nikki.]

At times like these, I often have to remind myself to chill out and trust God. Ecclesiastes 11:9 has been a regular verse for me during these last few years:

You who are young, be happy while you are young, and let your hearts give you joy in the days of your youth. Follow the ways of your heart and whatever your eyes see, but know that for all these things God will bring you into judgment.

In other words, as a friend said, “Be here now.”