A reminder for Monday morning:

certain truths remain unchanged: God remains sovereign, grace beats sin, prayers get heard, the Bible endures, heaven’s mercies spring up new every morning, the cross still testifies to the power of sacrificial love, the tomb is still empty, and the kingdom that Jesus announced is still expanding without needing to be bailed out by human efforts. 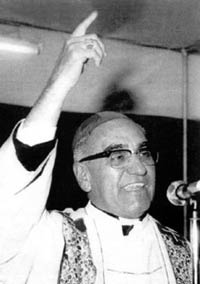 Thirty years ago, on March 24, 1980, Óscar Romero, Archbishop of San Salvador, human rights activist, advocate for the poor and the victims of the Salvadoran civil war, was assassinated as he closed his homily during Mass.

I have these words of his written in my journal to serve as a reminder and encouragement to be faithful to what God has called me to:

It helps, now and then, to step back and take a long view. The kingdom is not only beyond our efforts, it is even beyond our vision. We accomplish in our lifetime only a tiny fraction of the magnificent enterprise that is God’s work. Nothing we do is complete, which is a way of saying that the Kingdom always lies beyond us.

No statement says all that could be said. No prayer fully expresses our faith. No confession brings perfection. No pastoral visit brings wholeness. No program accomplishes the Church’s mission. No set of goals and objectives includes everything.

This is what we are about. We plant the seeds that one day will grow. We water seeds already planted, knowing that they hold future promise. We lay foundations that will need further development. We provide yeast that produces far beyond our capabilities. We cannot do everything, and there is a sense of liberation in realizing that.

This enables us to do something, and to do it very well. It may be incomplete, but it is a beginning, a step along the way, an opportunity for the Lord’s grace to enter and do the rest. We may never see the end results, but that is the difference between the master builder and the worker. We are workers, not master builders; ministers, not messiahs. We are prophets of a future not our own.

Last night I walked down 14th Street NW, past Columbia Ave where a police car was parked, blocking entry to the street; and I watched people milling about, heading home after work. A wave of emotion hit me like a sucker-punch as I wondered how many of them knew that they were walking past the place where, two nights previously, nine year-old Oscar Fuentes was shot and killed.

I whispered a prayer for Oscar’s grieving family, and as I did so, I was reminded with startling clarity of a few of the reasons I do what I do:

Because I believe that the God I serve weeps over every life that is lost—including a nine year-old boy named Oscar Fuentes—I live and work for a world where every person is valued and honored for the image of God within him or her, regardless of how smudged and tainted this image has become (Genesis 1-3).

Because I believe that when Jesus told us to pray that God’s kingdom would come on earth—of which the evidence would be God’s will done on earth as in heaven (Matthew 6:10)—he wanted us to envision a world where there are no more tears, where mourning and crying and pain are no more (Revelation 21), I seek to live and work with the Spirit who is already at work in our world to see this come to pass, as elusive and impossible as this may be this side of Christ’s return.

Because I believe that day of the Lord—when nations shall beat their swords into plowshares and their spears into pruning hooks (Isaiah 2:4)—was inaugurated by the coming of Jesus, I live and work for a world characterized by a peace that is not simply an absence of violence and war but a wholeness of relationships with God, with others, with oneself, and with creation.

Because I believe that the redemption and salvation that came with Jesus Christ are not just a personal gift but a calling to a life that places others before ourselves (Philippians 2), I live and work for a world in which those who have not and cannot experience the many freedoms that I have may know those same freedoms.

“How long, O Lord?” the psalmists lament on many, many, many occasions. And for good reason: we live in the interim between Christ’s resurrection and his return, in the painful in-between. There remains much that is broken and sin-stained, and often we groan with creation as we hope for the promises to come (Romans 8).

But when I start feeling paralyzed by the sheer size of the challenges facing those of us who seek to live out the kingdom of God on earth, when I start wondering why I’m doing what I’m doing, when I get a little overwhelmed by the sheer number of things that are in need of repair and redemption, I look at the picture of Oscar Fuentes, newly stuck up on my wall next to pictures of my nieces and nephews, aged between 18 months and 13 years.

I remember that God so loved the world that he sent his only Son to save us all (John 3:16-17), that we might have life abundantly (John 10:10), and in this blessing we might carry out the ancient commission to be a blessing to others (Genesis 12:1-3). And I remember why I do what I do.

We cry out to you for the things that are on your heart: for peace, for justice, for love, for holiness. These are far too scarce in the world you have entrusted to us. Bring about your purposes; as you have done in ways often subtle and unseen, do again in this generation.

In this time of hopelessness, send your hope. For we are longing, groaning with all of creation, desperate for you to act, to move–through us and apart from us. We trust that you are faithful, that you are active, as you always have been.

We have strayed far from you, in thought and word and deed; we have misrepresented you to the world. But we praise and thank you for your abundant grace that works even through our misled and misguided methods.

You will provide, though we don’t know how.

You will bring peace, though we can’t see how.

You will bring your kingdom on earth, and we can’t wait to see the fullness of that day.