Earlier this week, I went to a local showing of “Half the Sky Live.” I got home with every intention of writing up my experience and my thoughts. But my friend Ken Fong got there ahead of me. Here are his thoughts:

At the urging of one of EBCLA deacons, I began reading NY Times bestseller Half the Sky: Turning Oppression into Opportunities for Women Worldwide. Co-authored by NY Times reporters Nicholas Kristof and Sheryl WuDunn (who are married to each other), it’s an eye-popping revelation of how believing that girls and women are inferior to men is causing them to disappear from the face of the earth.

The ratios of male newborns to female newborns around the world is always pretty darn close to being 50/50. So why is it, when governments and agencies count the number of males and females in the world later, that there are consistently fewer females than males? I mean, we’re talking significantly fewer females than males and yet, according to an old Chinese proverb, women hold up “half the sky.” Girls and women are somehow disappearing off the face of the planet.

In far too many places there are all kinds of customs, religious beliefs, and prejudices that revolve around some form of the belief that women are not as valuable as men. When a poor family in Asia discovers that one of their sons is ill, there’s a great likelihood that the parent will take him to see a doctor. If one of their daughters is ill, the parents are hugely reluctant to spend time and money to take her the doctors. Same goes for food: sons are typically fed better and more food than daughters. Or if the family is destitute, the parents are far more likely to sell their daughter to shady character than one of their sons. Maternal mortality (dying while trying to deliver a baby) is another injustice that claims the lives of one mother every minute. Being trafficked as a prostitute in a neighboring country. Being denied the same education that boys are given. Being kidnapped and then raped so that she is no longer a virgin and ‘unfit’ for any other male in the village. Then the kidnapper/rapist has the gall to approach her father and ask for her hand in marriage! ‘Honor killings’ are committed by the girls’ own brothers in an effort to ‘regain’ the families’ honor if it’s found out that she no longer a virgin. Or, like in some parts of India, if a young woman spurns the advances of a male suitor, oftentimes he will surprise her later and throw acid in her face, horribly disfiguring and often blinding her. In the countries where these ‘honor’ acts of violence and evil towards women occur, the male culprits are rarely if ever arrested and then prosecuted. “She had it coming, you know.” It’s enough to make you blow a gasket, especially if, like me, you are committed to loving and honoring girls and women.

Through the CARE organization, the United Nations, and a growing “Half the Sky” movement around the globe, girls and women are being empowered to speak up and speak out, to insist that they are as valuable as any male. We heard numerous stories of even young girls who, when given access to education and protected from the perils associated with being born female in their societies, learned the laws of their countries, brought charges against the male perpetrators, and even eventually were the catalysts for shifting their culture’s paradigms towards girls and women. It was truly inspirational to ‘meet’ some of these valiant heroes who couldn’t, in many cases, restore their own virginity or dignity, but pursued this as their Heroes’ Journey on behalf of all other girls and women in their countries.

I came home with a disturbing question and a determined conviction.

The Disturbing Question: When some Christian groups interpret the Bible as teaching that God created women to live in a male-ruled hierarchy, that they must obediently submit to male ‘heads’ or risk violating a divine mandate, aren’t they also contributing to the oppression of girls and women? I left the theater no longer satisfied with just saying, ‘different strokes for different folks.’ Even if the point is made that the Bible teaches that women are of equal value before God, if a person’s being a female automatically and always means that they are overtly or subtly denied equal opportunities to learn, to lead, to teach, etc., that is oppressing them in the name of God.

The Determined Conviction: As a male whom the current Christian and societal system favors, I must take even more seriously God’s challenge to steward properly whatever power I’ve been given simply because I am male. Rather than use it to “rule over” those who start with less power, I am more determined than ever to use it to open doors that are now closed, to provide opportunities to grow as leaders and thinkers and preachers. I’ve been doing this for years, but now, more than ever, I will not simply enjoy my male privileges but use them to bless girls and women who today may not have access to those same privileges.

Ken Fong is the senior pastor of Evergreen Baptist Church, Los Angeles, and author of a number of books, including Secure in God’s Embrace: Living as the Father’s Adopted Child and Pursuing the Pearl: A Comprehensive Resource for Multi-Asian Ministry. He is also extremely awesome. 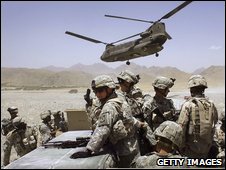 Tom Friedman and Nick Kristof both argue against a troop increase. And I’m inclined to agree–an increase in military presence isn’t guaranteed (by any means) to quell the violence. Kristof argues instead for more schools–for the cost of one soldier, we could build 20 schools.

Also, in case you didn’t catch it, read an online chat with Matthew Hoh, who was the first U.S. official known to resign over the war in Afghanistan.