[Part 1 of the blog adaptation from yesterday’s message at The District Church: “How Do I Know? Relationships Edition.” Read part 2 here.]

How do I know whom to spend time with? We all face the same conundrum: what do we do with our limited time and energy? How do we choose where and with whom to invest ourselves?

I’ve moved around a lot: I was born in Hong Kong, lived in London for eight years for school, and then the LA area for three before moving here. I’m used to starting over, to making new friends, to rebuilding community in a new place.

But DC was by far the most difficult place to transition to. Part of that was because I wasn’t entering a school community—when you’re entering a school community, you’ve got a whole host of people saying, “Make friends with me!” but when you don’t have that, you realize that people already have their friendship circles and their routines; and making friends requires more than just you putting yourself out there but also for someone else to open up their life and invite you in.

Sociologically speaking, it’s supposed to take about six months for relationships to develop to the place where you might call them good friendships, which is often what grounds a person in a place and makes that place begin to feel more welcoming. I have always hated those six months: I’ve always wanted to bypass those six months and jump straight to the part where I’m known and I’m loved and I have friendships that are deep and solid.

At this point, I think it’s important to say:

We are created for relationship.

As Christians, we believe that God is somehow Three—Father, Son, and Spirit—and yet also still one God. There is community even within the Godhead; there is relationship even among the persons of the Trinity. In fact, John Zizioulas argues that it is relationship that defines personhood, that it is because the three persons of the Trinity are in relation to one another that they even are persons—it is their relating to each other that makes them persons—and that were they not to be in relationship with one another, they would cease to be persons; they would only be individuals.

1 John 4:8 says, “God is love”—you may have heard that before. That verse used to put a strange picture in my head of God being this glowing, usually pinkish, fluffy mass of warm-fuzzies. But love is a relational word; love is communal by definition—it requires one who loves and one who is loved. Therefore, if God is love, God is relational. And if God is love and if God is relational, and if, as Genesis 1:26 tells us, God made us in his image, then that means we also are created for relationship.

Anyway, as I discovered, as time went by, that DC is full of awesome people. Unfortunately, as I also discovered, there’s no way you can get to know them all. You can try, but (1) you really wouldn’t make any deep or solid friendships, and (2) you’d burn yourself out pretty quickly. Because we’re only human, and like I said earlier, we only have a certain number of hours in a week—and a big chunk of that is taken up with work and with sleep and maybe with a significant other or a family.

So … part of what made DC a hard place to transition to was the school/work piece. The other factor is that we live in DC: cities are transient by nature, but out of all the places I’ve called home, I’ve found DC to be the most transient of all. People come for three months or six months or a year or two years, or maybe even three or four, if you’re lucky; but anybody who’s been in DC for more than six months has probably seen their fair share of friends come and go.

And that’s hard for friendships; that’s hard for building genuine and close community. Constantly saying goodbye to people you love—whether they’re leaving to go to grad school on the other side of the country, or leaving to move closer to family because they’re starting to have kids, or leaving because they don’t like the pace of the city—it’s exhausting because every time, you feel like you lose a little part of yourself, and you become a little more wary of investing in a new connection because you wonder if it’s really worth it.

These things that we feel—the push and pull of relationships beginning and relationships ending—are natural. They are, along with our limits, also part of being human. So how do we go about investing in community? How do we figure out whom to spend our time with?

Well, it’s always helpful to look to Jesus, because he’s the one we are called to follow, the one whose example we are invited to emulate. Jesus didn’t live life as a lone wolf; and yet he also knew that he couldn’t be tight with everyone: he knew his time and his energy were limited, and that he couldn’t go a mile wide and an inch deep in a relational sense, and expect to have any lasting impact on anyone’s life.

And when day came, [Jesus] called his disciples and chose twelve of them, whom he also named apostles …

There were clearly more than twelve disciples—but twelve were chosen to be the inner circle. These were the ones he pulled aside and explained parables to; these were the ones he intentionally chose to do life with at a much deeper level than, for example, the 5,000 who came to hear him, or the folks that just wanted to be healed, or the people that clamored for a miracle.

It was in these relationships that the disciples really learned who Jesus was. They got to see everything: what he did and how he behaved and how he treated people—kind of like what we get to see because we have the gospel stories, but even more than that. These were the ones to whom Jesus said, “I do not call you servants any longer, because the servant does not know what the master is doing; but I have called you friends …” (John 15:15) 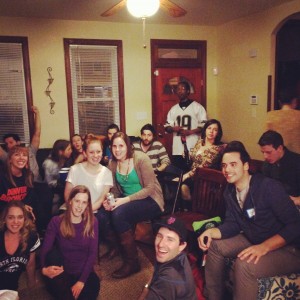 One of our core values as a church is community—connecting with one another; and one of the primary mediums for this is our small groups. Our hope is that no one would leave DC because they couldn’t find a place to call their spiritual home or people to call their spiritual family. Our small groups aren’t just so you can make new acquaintances; they’re supposed to be a place where you learn how to be better disciples, how to be true friends: encouraging and challenging one another to keep growing, to keep learning, to keep becoming more like Jesus. And like all relationships, these take time and investment and intentionality.

DC has a way of filling your life so full that you don’t even have time to think about what you’re doing—you’re just reacting, you’re just trying to keep your head above water—but a filled life is not the same as a fulfilled life. When Jesus said he came that we might have life to the full (John 10:10), he didn’t mean that in the quantitative way—that our calendars would be full—but in the qualitative way—that our lives would have the characteristics of wholeness, of health, of flourishing.

So you might need to start by stopping, sitting down, taking out your schedule, and having a good long look at it; take stock of where you are right now. If you’re engaged or married, you may want to do this with your significant other as well. Ask yourself questions like:

For some, I think the challenge will be to invest in Christian community: to join a small group, to stick around after the service and have a conversation that may lead to a friendship, to let go of the cynicism or the fear or the uncertainty and take the risk of putting yourself out there. When Aaron and Amy heard how difficult my transition to DC had been back in 2009, they invited me to spend Christmas with them. I didn’t know them that well at the time, and so I had to decide whether I was willing to experience what could easily have been awkward conversations and a car journey and a holiday with a family I didn’t know too well, or whether I’d avoid that awkwardness and, by extension, avoid beginning to cultivate a friendship with them. You can probably guess what, by the grace of God, I chose; and I can honestly say that if I hadn’t chosen that path, I might not be here right now.

For some, the challenge is to get out of the Christian bubble—you come to worship services and you hang out with your small group every couple days and maybe you work at a Christian organization at least 40 hours a week. You may need to make friends with people who may not yet know Jesus. Jesus says that we are the light of the world (Matthew 5:14), but if we’re just hanging out in a room with a whole bunch of other lights, then our light is really not fulfilling its purpose, no matter how brightly you may shine. Light is supposed to shine in the darkness.

If you’re getting the impression that I’m pitting these two things against each other—hanging out with Christians and hanging out with non-Christians—that’s not what I’m trying to say. Because they’re interconnected. It takes a community to truly live out the gospel: on a practical level, you’re going to need folks who can help you keep walking with Jesus because the enemy will use everything in his power to knock you off course.

We need each other to be who God is calling us to be: the family of God on the mission of God to see more of the kingdom of God here on earth.

Tags: christian dating community dating discernment friends friendships how do i know how do i know who to date jesus relationships
« previous next »