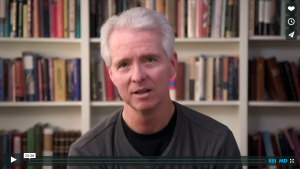 I wanted to share this last week’s sermon from John Ortberg at Menlo Park Presbyterian Church. MPPC is going through a series called FAQ (Frequently Asked Questions), and I know this question is one that I’ve had conversations about so I hope it’s helpful! (You can click here or on the image to watch the video.)

It’s also an excuse to repost one of my favorite — and, personally, most regularly challenging — quotes about Jesus’ relationship with women, from Dorothy Sayers: