The first time I saw Les Misérables was in 1996, when the show came to Hong Kong and my mom took me; and it’s been one of my favorite musicals–and stories–ever since, with tremendous set pieces, brilliant melodies, and explorations of law and grace and fortune and forgiveness and the marginalized.

The epilogue version of “Do You Hear the People Sing?” has got to be one of my favorite parts, though. I managed to get through all of the movie (which I saw last night) without tearing up. And then the epilogue came.

Here’s the version from the 25th anniversary performance (beginning around 1:45), with a bonus rendition of “Bring Him Home” by four Jean Valjean’s afterward.

Do you hear the people sing, lost in the valley of the night?
It is the music of a people who are climbing to the light.
For the wretched of the earth, there is a flame that never dies;
even the darkest night will end and the sun will rise.

They will live again in freedom in the garden of the Lord;
they will walk behind the plowshare, they will put away the sword.
The chain will be broken and all men will have their reward!

Will you join in our crusade? Who will be strong and stand with me?
Somewhere beyond the barricade is there a world you long to see?
Do you hear the people sing? Say, do you hear the distant drums?
It is the future that they bring when tomorrow comes!

P.S. You can get the movie soundtrack for $5 on Amazon; not sure how long that’s going to last so you should snap that up! 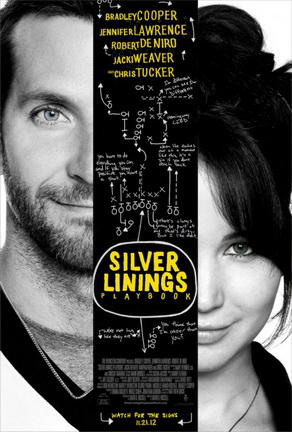 Last night I got the chance to attend an advance screening of Silver Linings Playbook, the new film by David O. Russell (director of The Fighter and Three Kings), and starring Bradley Cooper, Jennifer Lawrence and Robert De Niro.

One of my favorite movies of the year so far.

Silver Linings Playbook is released in the US on November 21.

I’m reading Ronald White’s biography of Lincoln at the moment, so I’m particularly looking forward to this!

It’s been awhile since I’ve made time for things that give me life, that aren’t necessarily ‘productive’ but are highly conducive to my spiritual, mental and emotional health–things as simple as reading a book, or going to see a movie, or discovering new music. I realized that I needed to build a little more of that into my schedule, and with the extra time afforded me by my sports injuries (from which I’m recovering), I’ve been able to indulge a little.

Between Two Worlds, John W. Stott. A great and classic resource on preaching; insightful and wise. Stott’s been a spiritual mentor of mine and a favorite theologian, and when I read books of his like this one, I feel his passing all the more keenly.

LeadershipNext, Eddie Gibbs. Examining what leadership–particularly in the church–looks like as we launch into the 21st century. Gibbs is a professor at Fuller Seminary, and has been involved with a number of emerging church movements. In reading this, I was glad to see that we at The District Church are already living out a lot of the things he said would be needed to thrive.

A Game of Thrones, George R.R. Martin. I’m re-reading this fantastic work of fiction in light of the HBO series whose first season just finished, and also the latest installment, “A Dance with Dragons,” that just came out. When I first read this, years ago, I couldn’t handle it. The bad guys weren’t clear; the good guys weren’t clear; I didn’t know who I was supposed to root for. But reading it again last year, having the benefit of a few years of age, wisdom and maybe a dose of realism, I was able to appreciate that there aren’t easy answers, it isn’t a black-and-white world, and that not everyone you care about lives to see the happy ending. A fantasy-fiction series for a post-modern world.

A riproaring adventure, a fun comic book adaptation, an enjoyable ride. Definitely, definitely, definitely had its cheesy, “ra-ra America” moments (a.k.a. Team America moments), but on the whole, I had fun. Chris Evans did a great job as Cap, Tommy Lee Jones was hilarious–as usual when he’s trying to be, e.g. Men in Black–and it set the scene well for next summer’s blockbuster adventure, The Avengers, which you get a preview of at the end of the credits–so exciting!!

Cowboys? Cool. Aliens? Cool. Combined? A boy’s dream. Lots of shooting and explosions, two generations of leading men (Harrison Ford–sorry, dude–and Daniel Craig), and Olivia Wilde? Entertainment. I’m not going to dissect this, or talk about postcolonialism, or even how it could’ve been a better movie. It was a good and fun and entertaining enough for me! Thanks to Jon Favreau, who’s really showing his directing chops–with this, the Iron Man movies, and Elf, the guy’s got some talent.

Definitely one of my favorite movies of the year. In the story of a middle-aged man whose life falls apart around him, Steve Carell, Julianne Moore, Ryan Gosling and Emma Stone light up a fantastic script–at turns heartwarming, gut-wrenching, painful, hilarious, sad, frustrating, and laugh-out-loud funny. Kevin Bacon and Marisa Tomei provide some stellar support, and welcome to the big screen, Analeigh Tipton! I went on the basis of my friends’ recommendations, and I’m telling you now: go see it.

Zonoscope, Cut Copy. Fun indie, electronic music. Thanks to JY for the recommendation.

Bon Iver, Bon Iver. All my friends (hipster and otherwise) had been raving about this. And it’s warranted. My first taste of Bon Iver’s music, and it’s a good one.

10,000 Reasons, Matt Redman. The latest offering from a Christian music stalwart, Matt continues to write songs that speak for a new generation. Love the guy’s heart.

Strip Me, Natasha Bedingfield. This actually came out last year, but I only got it this summer. Natasha’s always got a way of making me smile with her music. So much love for her.

Just got home from watching the new Prince of Persia, with Jake Gyllenhaal, Gemma Arterton and Ben Kingsley. For a movie based on a video game, it was decently entertaining. I think it helped that I went in with loooooooooow expectations. Apart from the fact that it’s based on a video game (there aren’t very many video games that have made a good transition to the screen), it also had Jake Gyllenhaal (who’s a great actor) doing a British accent. You could tell it was based on the game, from the wall-leaping to the sand-dagger-rewind-trick.

But I guess what disturbed me (in addition to the wobbly British accent–why are Persians speaking with English accents?! Better than American, I suppose–and the often-clunky dialogue and paper-thin plot) was the fact that it’s a movie set in Persia (modern-day Iran), with leads who are white (Ben Kingsley’s part-Gujarati Indian so he gets a pass). Like I said, Jake’s a great actor, and Gemma is beautiful, but … really?

How about Sarah Shahi (below)?

Plus, among the previews were The Last Airbender and The Karate Kid. From Avatar’s Wikipedia entry: “Avatar is set in an Asian-influenced world of Chinese martial arts and elemental manipulation.” So, naturally, you have young Noah Ringer playing the lead Asian character (Aang). And seriously, if you want to remake TKK but you change the form of martial arts and set it in China, maybe you should rename it to The Kung Fu Kid, since one is Japanese and the other is Chinese. Sigh … racebending gets me all het up.

P.S. On the way out, Ryan and I were overrun by a stampede of X-chromosomes on their way to Sex and the City 2. Seriously, not a guy in sight.