It’s been 10 months since my last blog. To say that a lot has happened in that time would be understating it just a little bit, but honestly, I haven’t really had the words to talk about the last year. I haven’t known what to say or how to say it: there have been too many stories to tell, too much background to fill in, too many threads that would take too long to follow.

I guess the biggest news is that I’m no longer at The District Church any more. This summer, the congregation formerly known as the East Side parish of The District Church (which we planted four years ago) was launched as an independent church, so now I’m the Pastor of Liturgy and Spiritual Formation at Christ City Church, where Matthew Watson and I continue to pastor together. Predictably, the summer was filled with the busyness of setting up a new church: filing articles of incorporation, opening bank accounts, writing bylaws, and such; figuring out new structures (such as an elder board) and new rhythms and responsibilities of work; and the pastoral challenge of walking a community through a pretty massive transition and into a new chapter of congregational life together. As you can imagine, it’s been a lot! 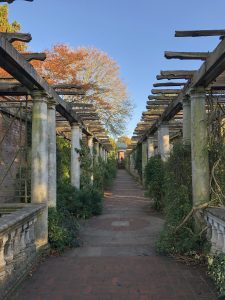 Thankfully, throughout the spiritual, emotional, relational, and even vocational strain of the last few months, God has done what God does — most pertinently, sit with us in our grief and bring life out of death. And God has begun knitting things back together in my own life, through prayer and divine encounter as well as through those with whom I’ve been honored to call friends in this season.The work and the healing and the processing are far from over, but we are far from alone and that in itself is grace.

The other week, I was back in the UK for a few days, and a friend and I arranged to meet for dinner. I hadn’t yet been to his new place, so I stuck the address into my phone and followed the directions. As I was walking, I realized it was taking me on a route I’d walked many times before, fifteen years ago when I was in college and dating A. In fact, it took me past her old house; she doesn’t live there any more. I’m not sure I could name all of the feelings I experienced in that moment — it was a strange mixture of joy and sadness and nostalgia and gratitude and wonderment at what was, at what happened in the intervening years, and at where we are now. In the midst of that, God reminded me of the words of an ancient teacher:

For everything there is a season …

I’ve experienced that in places I’ve called home, in passions and pastimes, in friendships and relationships, and even in churches. Some endings we get to choose; others are chosen for us. Thanks be to the God who can bring life out of all of them … even when it takes longer than we would like or looks different from what we had hoped.

If you’re interested, I talk about these things a little more in a couple of sermons: “New Name, Same Calling”, on Launch Sunday back in August, when Matthew and I co-taught; and “Grief and Lament: Tools for Life”, given just the other week as part of our Psalms series.