But it was our sins that did that to him, that ripped and tore and crushed him — our sins! He took the punishment, and that made us whole. Through his bruises we get healed. 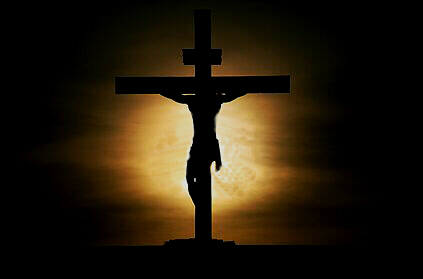 Jesus is the Lord, but it’s the crucified Jesus who is Lord–precisely because it’s his crucifixion that has won the victory over all the other powers that think of themselves as in charge of the world. But that means that his followers, charged with implementing his victory in the world, will themselves have to do so by the same method. One of the most striking things about some of (what we normally see as) the later material in the New Testament is the constant theme of suffering, suffering not as something merely to be bravely borne for Jesus’s sake, but as something that is mysteriously taken up into the redemptive suffering of Jesus himself. He won his victory through suffering; his followers win theirs through sharing in his.

The Spirit and suffering. Great joy and great cost. Those who follow Jesus and claim him (and proclaim him) as Lord learn both of them. It’s as simple as that.

Without the perspective that sees evil as a dark force that stands behind human reality, the issue of “good” and “bad” in our world is easy to decipher. It is fatally easy, and I mean fatally easy, to typecast “people like us” as basically good and “people like them” as basically evil. This is a danger we in our day should be aware of, after the disastrous attempts by some Western leaders to speak about an “axis of evil” and then to go to war to obliterate it. We turn ourselves into angels and “the other lot” into demons; we “demonize” our opponents. This is a convenient tool for avoiding having to think, but it is disastrous for both our thinking and our behavior.

But when you take seriously the existence and malevolence of non-human forces that are capable of using “us” as well as “them” in the service of evil, the focus shifts. As the hazy and shadowy realities come into view, what we thought was clear and straightforward becomes blurred. Life becomes more complex, but arguably more realistic. The traditional lines of friend and foe are not so easy to draw. You can no longer assume that “that lot” are simply agents of the devil and “this lot”–us and our friends–are automatically on God’s side. If there is an enemy at work, it is a subtle, cunning enemy, much too clever to allow itself to be identified simply with one person, one group, or one nation. Only twice in the gospel story does Jesus address “the satan” directly by that title: once when rebuking him in the temptation narrative (Matt. 4:10), and again when he is rebuking his closest associate (Mark 8:33) for resisting God’s strange plan. The line between good and evil is clear at the level of God, on the one hand, and the satan, on the other. It is much, much less clear as it passes through human beings, individually and collectively.