Well … I’ve finished my first academic year at Fuller; I handed in my take-home exam for Ethics (on homosexuality) half an hour ago. This means that (theoretically) I’ll have more time to blog. I’ll try …

Meanwhile, what’s happened in the two weeks since I last blogged …

Murphy’s Law
Also known as Sod’s Law, this is defined thus: “a humorous axiom stating that anything that can go wrong will go wrong.” An example of this is my blog about not getting seriously injured being followed a few days by a pulled hamstring at soccer. So I’ll be out for a couple more weeks—fortunately, being in California, I don’t have to worry about missing the good weather. ☺

Intramural softball
Pulling my hamstring two Saturdays ago was not particularly good timing, since the intramural softball championship was the following Friday. But I could walk by the time Friday rolled around, so I wrapped my thigh up (as well as my wrists, which were also sore), and toughed it out. Unfortunately, I play softball Ichiro-style, legging out infield hits and the like. Hobbled by a strained hamstring, I could only jog, and so didn’t get on base as often as I would’ve liked. 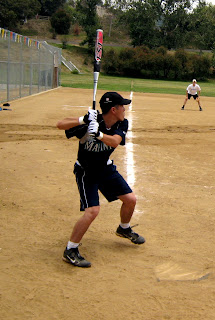 Anyway, the LA Champs of Los Angeles (my softball team) put up a good fight, but came in second after scoring a season-low two runs and having an uncharacteristic defensive meltdown in the final inning in the championship game. Still, there’s next year … 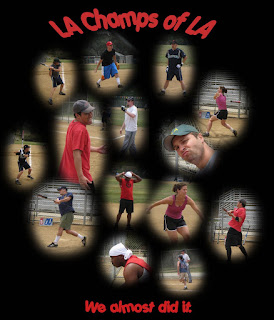