So most of you will know this already, but for those of you who don’t …

Last Thursday, I went for a hike with some friends for a Liz’s birthday, to a place where there is a waterfall. 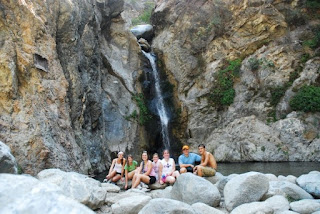 Anyway, there’s a second waterfall nearby—according to what I’d read, it wasn’t too far off the first trail. So I went on ahead for a little free climb scouting expedition … 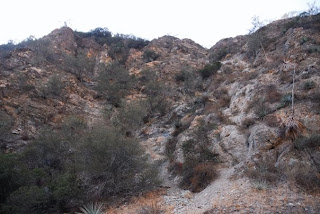 But after I’d been climbing for 15-20 minutes, I still couldn’t even hear the waterfall (and the others hadn’t seen me for a while), so I decided to come down. Which was not as easy as going up.

Coming down, I slipped twice: once around halfway, slid about 20-30ft, burned off some fingertips grabbing for something to hold on to, and split open my left shin to the bone (though I didn’t know it at the time). Then I slipped closer to the bottom, slid 10-15ft and narrowly avoided hitting my head on a rock.

Fortunately, I was able to walk fine and get back to the others. Adam washed it as best he could, tore up his spare t-shirt and wrapped it around the gash, but not before taking a picture. Priorities … 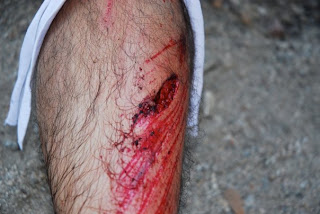 It could’ve been much worse, but wasn’t. I escaped with eighteen stitches (3 inside, 15 outside), a number of cuts and scratches, a bruised tailbone, burned fingertips, and my life. So I’m grateful for God’s protection, even though last Friday (the day after) I felt like I got beat up on by a mountain.

And now, I’m healing up already; quicker than I expected, but slower than I’d like. 🙂

P.S. I’m starting to blog on the political goings on. If you want to read my thoughts on that, head over to the fledgling Amateur Political Commentary.