[The following is adapted from yesterday’s message at The District Church, “Learning How to Live Well.” Listen to the podcast here.] 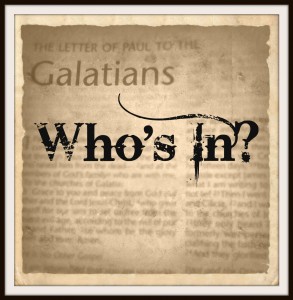 The life well lived is not an impossibility.

Jesus says in John 10:10, “I came that they might have life, and life to the full.” The Greek word used for “life” here is zoë, which has a spiritual element to it. It conveys a sense in which you’re not just healthy physically or mentally or emotionally, but at the very core of your being, in your very soul, you’re alive—you’re operating out of the depths of a groundedness, creating a life upon the firm foundation of Jesus Christ that’s going to stand regardless of the circumstances you may find yourself in, and even when your physical, mental or emotional health fluctuate, as they do and as they will.

In Galatians 5:16-26, Paul takes the two understandings of freedom—the world’s, which seeks to gratify what’s sometimes called “the flesh” or “the sinful nature”—that, sadly, is our inclination as fallen, broken, messed-up, sinful human beings; and God’s, which is about “living by the Spirit,” fulfilling our created intentions to be in right relationship with our Creator and with those around us—and Paul helps us here see what those things look like. He says:

So he lays them out very starkly, side by side: the works of the flesh and the fruit of the Spirit. But they aren’t just “do’s” and “don’ts.” It’s not just another checklist of things you need to do or not do in order to make it into heaven. I think The Message does a great job of bringing these words to life, though:

It is obvious what kind of life develops out of trying to get your own way all the time: repetitive, loveless, cheap sex; a stinking accumulation of mental and emotional garbage; frenzied and joyless grabs for happiness; trinket gods; magic-show religion; paranoid loneliness; cutthroat competition; all-consuming-yet-never-satisfied wants; a brutal temper; an impotence to love or be loved; divided homes and divided lives; small-minded and lopsided pursuits; the vicious habit of depersonalizing everyone into a rival; uncontrolled and uncontrollable addictions; ugly parodies of community. I could go on.

This is the “kind of life [that] develops out of trying to get your own way all the time.” This is what we see all around us—the reality of living by the world’s definition of freedom, which is putting self first:

Welcome to the world of “do what you want” gone mad, full of systems and structures that have been built up and reinforced and buttressed by continued habits of individuals who have put themselves—and let’s be honest here, ourselves, because we’ve all done this—and our interests before everyone and everything else.

And, Paul says, if we make—or continue to make—putting ourselves first into a lifestyle, if we consistently put our wants and needs above others’ wants and needs or reject what God tells us is what we were made for, we close ourselves off from the flow of God, from growing to be more like God, from being who we were created to be. And the consequence is:

those who do such things will not inherit the kingdom of God. (5:21)

It’s pretty straightforward, strong language. It’s pretty uncomfortable for us to hear. We don’t like hearing that there are consequences and cut-offs. But, if you think about it, this is merely a logical conclusion: if the kingdom of God is where God reigns and where his character is supreme, and if he is characterized by love, joy, peace, and all of the other things we’re about to talk about, then the person who consistently lives for him- or herself is clearly choosing the opposite. If you draw a shape with three sides, you have not drawn a circle, however many times you try to do it—that is a logical conclusion. And so, N.T. Wright concludes:

a society in which most people behaved in such a way is unlikely to be a happy or thriving place. What is more, when God finally establishes his kingdom, people like that will have no place in it; it would be very surprising if they did. That’s not the sort of place, and state of affairs, that God wishes ultimately to create.

And that’s not who God is. And if the life of faith is about life with God, about becoming more like God, then it makes sense that “those who do these things will not inherit the kingdom of God”—they are choosing to say no to Jesus, to the fulfilled life, to a restored relationship with the God who loves us.

This is the alternative:

By contrast, the fruit of the Spirit is love, joy, peace, patience, kindness, generosity, faithfulness,  gentleness, and self-control. There is no law against such things. (5:22-23)

We could easily devote a blog post (or book) to each of these (and maybe I will, one day), but in the interests of time I’m going to highlight three.

Paul uses the analogy of fruit very intentionally—just as Jesus did in Matthew 7, when he said, “Every good tree bears good fruit, and every bad tree bears bad fruit; you will know them by their fruits”—because we can’t just make fruit. Fruit doesn’t simply appear, fully formed and ready to go; it grows.