Last night, 22-year-old Howard University student Omar Sykes was fatally shot and a friend was assaulted in what looks like an attempted robbery. Apparently, it took place about a half hour after I got home and was already asleep, having tuned out the fireworks that were happening in the back alley. (See news reports here, here, and here.) 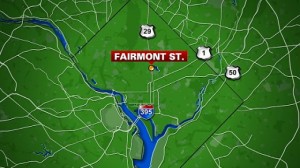 I went out this morning and talked with a police technician and detective who were still finishing up at the scene, but didn’t have anything to add. A little while later, a fire truck came by to clean up some blood on the sidewalk a few houses up.

It’s a little surreal seeing your street on the local news and knowing that you’re inside the police tape; and it’s jarring that something like this could happen only twenty feet from your front door. Normally, there’s a posse of neighbors playing dominos on the front porch across the street late into the evening, but last night was one of the rare nights they weren’t out, and I can’t help but wonder how things could have been different.

This isn’t the first instance of violence that’s led to death in our neighborhood in the four years I’ve lived here — and almost every victim has been a young person, which is so tragic and infuriating. My neighbor Rebecca, who lives around the corner and whose daughter is a Howard student, said, “Why would someone do that? How awful to be the parents of that young person, getting a call late at night telling them that their child is gone.”

My heart breaks for the families of Omar Sykes and his friends. My prayers go out to them (and I hope you’ll join me). It’s in times like these that I’m reminded of my call to this place as a pastor, as a neighbor, and as a Christian living here: to love God with everything I’ve got and to love my neighbor as myself.

To love my neighbor means that I’ll pray as Jesus prayed, that God’s kingdom would come, and that I’ll work to see that happen — not just in some abstract, hyper-spiritual, ethereal sense, but in tangible ways: that we would work toward a society where people don’t need or choose to rob others, where people no longer choose to inflict harm on others, where people are able to live in safety and security, redeemed and reconciled and in right relationship with one another.

The prophet Micah spoke of a day to come when God would reign fully: “people shall beat their swords into plowshares and their spears into pruning hooks; nation shall not lift up sword against nation, neither shall they learn war any more; but they shall all sit under their own vines and under their own fig trees, and no one shall make them afraid; for the mouth of Yahweh of hosts has spoken.”

That is my prayer, a reminder of what I long for and what I’m called to be a part of bringing about: when guns give way to things that give life, when people can sit on their front porch or walk along a street without being afraid, for God is over all.