[At The District Church, we’ve just started a new series about identity and relationships — “To Love & Be Loved.” The first sermon, which Aaron gave yesterday, is about being children of God.]

In Matthew 18, Jesus is asked by his disciples, “Who is the greatest in the kingdom of heaven?” His response:

Wanting to know the order of things, wanting to know the hierarchy and who’s on top — these are inclinations that are normative to us; it’s how society operates. We pay attention to those at the top — politicians, celebrities, athletes — and those at the bottom — the poor, the vulnerable, those who have a “smaller voice” — are passed by.

It’s not surprising that the disciples asked such a question, is it? We ask the same thing — “Who is the greatest?” — every day in our own ways, often by what we pay attention to, by what we strive for, and by what we’re willing to do to get there. 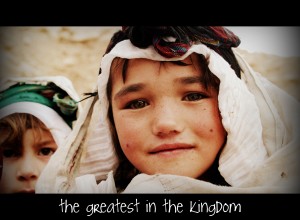 And yet Jesus’ response is to flip the script and say that we are to become like children, to become humble like children. In Jewish culture in Jesus’ time, children had no social status or authority — they were loved, but had “no status apart from that love, and no power or privileges apart from what they received as total dependents on their parents” (IVP NT Commentary). Jesus’ point is not a new one, but one he restates again and again — “Whoever wants to be first must be last of all and servant of all” (Mark 9:35).

In Matthew 3:17, when Jesus comes up out of the water after being baptized by John, the Spirit of God descends on him and the Father says, in the Message paraphrase:

“This is my Son, chosen and marked by my love, delight of my life.”

We are called to be defined not by the power or privilege or status or authority that we may claim for ourselves but by humility and by the love we receive from our Father.

[Image from our “Greatest in the Kingdom” sermon at The District Church, a couple years ago. Photo credit: Heather Wilson]

Tags: children faith greatest in the kingdom greatness identity jesus the district church to love and be loved
« previous next »