Last night I finally got to see the band Tim Be Told at Jammin Java in Vienna, VA. I’d wanted to see them since I was first introduced to their music a couple years ago but just missed them when I moved to the East Coast and they took their tour out west.

Anyway, last night was a perfect occasion, since I also got to see my friend Wendell Kimbrough open for them. Wendell and I had played together in a church setting several times over the last year, but it was a real treat to see him perform, with such highlights as ‘February,’ about how much he hates the second month of the year—and my friend Laura agreed heartily—and ‘Communication,’ a painfully spot-on portrayal of male-female (mis)communication. Go check him out!

Then, on to TBT, who opened with ‘Analyze,’ from their last album.

Other highlights from the evening included ‘Miscommunication,’ which was preceded by a proposal—yes, a real one; an acoustic set, including old song ‘Ordinary’; the title track from their newly-released album ‘Humanity,’ ‘Lament,’ and ‘Scared to be Alone.’

What I appreciated as much as the music, though, was Tim’s words between songs, sharing stories behind words, being open about good times and about struggles. It helped provide context for many of the songs, and really brought out the hope in their new album, ‘Humanity’ (which you can now order online on their website!).

Getting to chat with Tim, Andrew, Tim and Caleb afterwards was also stellar—they’re all solid guys.

Anyway, last night was the kick-off for their ‘Humanity’ tour. Go see them, if you can; you won’t regret it.

Social and political activism needs a better public relations manager. Activism is all too often associated with derelicts, rabble-rousers, radicals and extremists. This is in part because activists often defy authority, go agains the grain and spark controversy. But they also plant seeds of change in society and surface issues that would otherwise go ignored. Almost unconsciously we celebrate a long legacy of activism. America’s founding fathers were activists against oppressive British rule. Gandhi was an activist against the imperial British occupation of India. Rosa Parks was an activist in refusing to give up her seat on numerous occasions in Montgomery, Alabama, before being arrested and kick-starting a bus boycott that ignited a movement. Harriet Tubman was an activist who guided slaves to their freedom through the Underground Railroad. Archbishop Desmond Tutu was an activist fighting to dismantle the system of apartheid. Many of our most admired American and global leaders were activists. Most importantly, Christ was an activist who turned upside down the patterns of his world, ushering in a new kingdom that often stands in direct opposition to our earthly kingdom.

I guess we’ll find out on November 2. “Why are you looking for the Living One in a cemetery?” they said. “He is not here, but raised up.”

Only one has been raised from the dead. 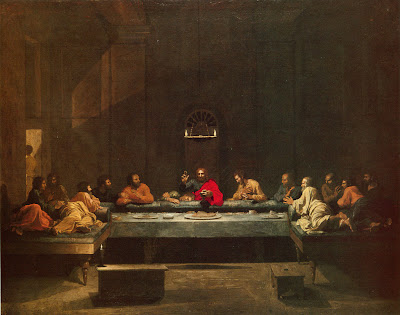 Today is Maundy Thursday, aka the day we remember the Last Supper. Here’s the account from Luke’s Gospel: