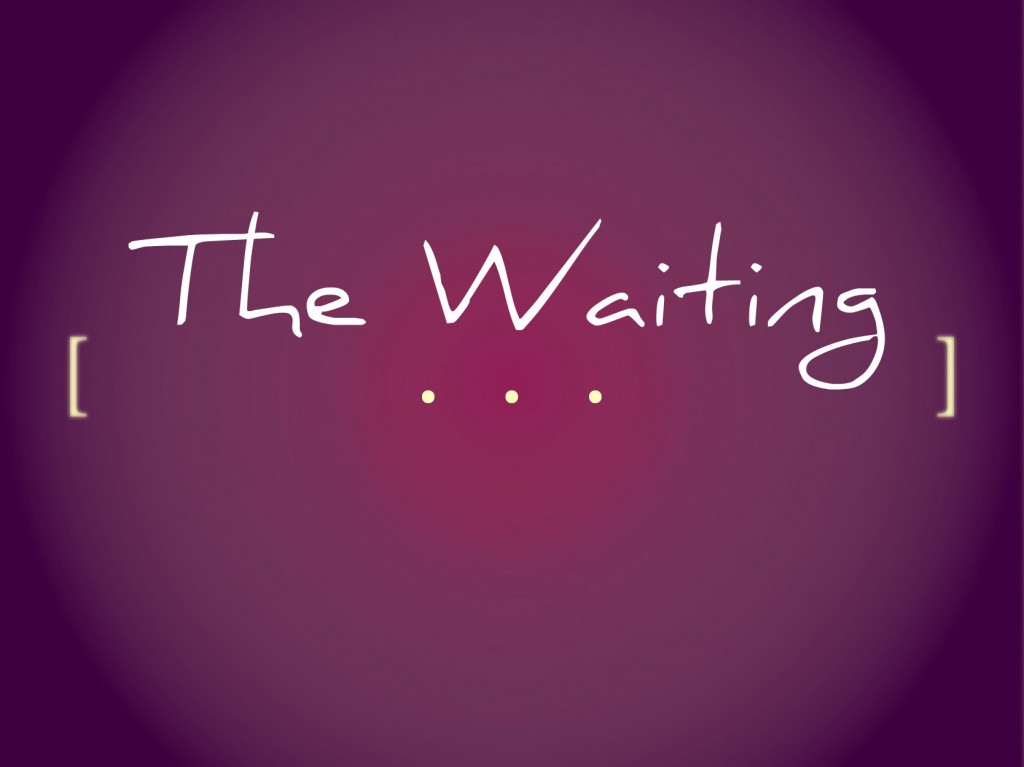 If you were to take a poll of the least popular things to do, waiting would probably be near the top, wouldn’t it? It’s probably one of the few things that nobody likes but everybody does. Because if you think about it, we’re always waiting for something, aren’t we?

Waiting is a natural human condition.

There’s always something we’re looking forward to (or not looking forward to). Life is never exactly as we would have it, and so we wait. Sometimes for things that are coming imminently: a loved one is coming into town for the holidays and you can’t wait to see them and pick them up from the airport, or you’re just excited about finally getting a break! Sometimes for things that are a little way off: a wedding that’s happening next summer that you’re both super excited and super stressed about, or finishing grad school and preparing for what comes next. And sometimes for things which we actually have no idea if they will ever come: being free from the addiction that’s tied you down for so long, reconciliation with a family member or a friend, finding a life partner, having kids, figuring out what to do with your life, getting the job you really want or maybe just a job—any job—to get you through the next month. Maybe it’s waiting on someone else, hoping beyond hope that he’ll get his life together, that she’ll start making better choices.

What is it that you’re waiting for?

The story of Jesus in the New Testament begins in Matthew 1:1, with “An account of the genealogy of Jesus the Messiah, the son of David, the son of Abraham.” It’s interesting that the two main figures Matthew names are David, the great king, the man after God’s own heart, and Abraham, the founding father, the patriarch of the faith. Two heroes of history—and yet they were no less human than you and me, and no more exempt from that natural human condition of waiting.

In 1 Samuel, we read about how David was anointed by Samuel to be the next king of Israel when he was only a boy; but he had to wait until he was thirty years old before he came into what God had promised. And in Genesis, we’re told how Abraham, childless in his old age, was promised by God that he would be the father of many nations, that his at-the-time-non-existent-offspring would be blessed to be a blessing to others; but he had to wait twenty-five years before his son Isaac was born. Twenty-five years!

When I was about twelve years old, my uncle, who was an orthodontist, told my parents and me that I was developing an underbite, that my lower jaw was growing faster than the rest of my facial bones, that this would eventually cause problems, and that I would eventually need surgery to fix it. I would obviously need to wait until the bones stopped growing before having the surgery, and in case you didn’t know this, facial bone growth usually doesn’t stop until a person is in their mid-twenties. So I waited, knowing that at some unknown point in the distant future, I would have surgery to … well, the way I saw it was, to fix my face.

For everyone around me, for my family and close friends who knew about this, it seemed a pretty straightforward concept—there’s a problem with the mechanics of your bone structure and this surgery will correct that. But for me, it went deeper: if I was getting surgery to change something (about my face, at that!), then that must mean there was something wrong with me, because if there was nothing wrong with me, then I wouldn’t need surgery, would I? And so it tapped into my sense of self-worth, the very core of my identity, the issue of who I was. I wrestled with God over this, wondered if this was why I hadn’t yet had a girlfriend. I questioned his purpose in this—my brothers didn’t have to go through this, why me? But there was really nothing I could do about it, no way to speed up the process of bone growth so that the corrective surgery could happen and all my problems would be solved. And so I waited.

It didn’t solve all my problems though, like I thought it would when I was a kid; and actually, by that time, I had come to realize that, of course, it wouldn’t solve all my problems (and this seems obvious when you’re thinking objectively, but when you’re in the middle of something, it can seem like the biggest struggle in the world). And, in fact, thinking about it, the dark cloud hadn’t been suddenly removed; it had been dissipating over the years, during the waiting, and the surgery was simply what had removed the last vestiges of that cloud.

In that waiting period, my brother gave me a book called Waiting: Finding Hope When God Seems Silent, by Ben Patterson—it’s a book that I come back to time and time again, and would heartily recommend. The central conviction of that book—what I realized through the process—is this: what God is doing in us while we wait is at least as important as what we think we’re waiting for.

While Abraham waited for the fulfillment of the promise, he learned what it meant to trust in God and what it looked like when he tried to take things into his own hands; he made mistakes, he had successes, he had moments where he essentially cried out to God, “Where’s this kid you promised?” But while he waited, he grew closer to God; he became more reliant on God; he realized that there was very little he could do. Romans 4:19-21 says:

He did not weaken in faith when he considered his own body, which was already as good as dead (for he was about a hundred years old), or when he considered the barrenness of Sarah’s womb. No distrust made him waver concerning the promise of God, but he grew strong in his faith as he gave glory to God, being fully convinced that God was able to do what he had promised.

While David waited to become king, he confronted Goliath, not in his own strength but in the strength of the Lord; he forged a deep friendship with Jonathan, who saw him for who he was and called him to greater things; he became an outlaw and an outcast, hunted by the very king he’d served faithfully. But while he waited, he grew closer to God; he became more reliant on God; he realized that his life wasn’t about being king, but about knowing God—and many of the psalms are a testament to this, including Psalm 27, which begins,

Which leads to the second point I want to make: what we think we’re waiting for is probably nowhere near as good as what God is actually going to give us.

(Which I’ll post tomorrow because, in a blog about waiting, of course I would! Part 2.)

Still buzzing from my first @arsenal game at the E

Started off a gorgeous summer day with a walk up t