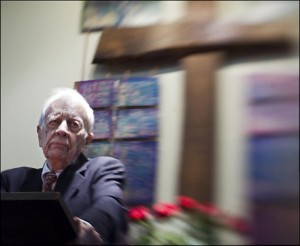 Gordon Cosby, founder of Church of the Savior, a church which began in our DC neighborhood in the 1940s, passed away yesterday morning.

Four years ago, just before I moved to DC, Church of the Savior was featured in a Washington Post article as its time as a church came to a close–“Activist D.C. Church Embraces Transition in Name of Its Mission.” Over its sixty years of existence, though it never grew to more than 200 people, the church had an amazing way of birthing communities of people that cared about their neighborhood: Christ House, Jubilee Housing, Jubilee Jobs, Potter’s House, Christ House, Mary’s Center, Samaritan Inns, to name just a few of the dozens of ministries that were created to see more of the kingdom of God in the neighborhoods of Adams Morgan, Mount Pleasant, Columbia Heights, and beyond.

Jim Wallis, my old boss at Sojourners, once described the Church of the Savior as having had “more influence around the country than any other church I know about.” Without Gordon and Mary Cosby’s commitment to Christ and to our neighborhood in decades past–long before it was a safe or popular place to be–Jim and Sojourners would not be who they are, our neighborhood wouldn’t be what it is, and neither The District Church nor I would be who we are.

I had a chance to meet and pray with Gordon last year (with Aaron). It was amazing–and amazingly humbling–to be in the presence of such a good and faithful servant, and I’m grateful that I got the opportunity to spend some time with him.

Thank you, Gordon, for your life and your faith; I walk in the path you carved and I follow in the footsteps you’ve left. Rest in peace.

Others have also written (far-more-eloquent) tributes to him, including: