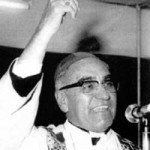 Very nice, pious considerations that don’t bother anyone,
that’s the way many would like preaching to be.
Those preachers who avoid every thorny matter
so as not to be harassed,
so as not to have conflicts and difficulties,
do not light up the world they live in.

They don’t have Peter’s courage, who told that crowd where the bloodstained hands still were that had killed Christ: “You killed him!” Even though the charge could cost him his life as well, he made it.

The gospel is courageous;
it’s the good news of him who came to take away the world’s sins.