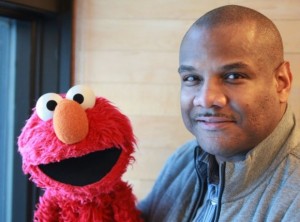 Last night I finally got around to watching Being Elmo: A Puppeteer’s Journey. It came highly recommended by many of my friends, and I wasn’t disappointed. I’ll admit that I’ve loved Elmo since I was a kid–at one point in middle school, I may have perfected Elmo’s voice … yeah, it absolutely got me all the girls.

Anyway, the documentary was a fascinating look at the life of Kevin Clash, the guy who made Elmo who he is today, from his humble beginnings in Baltimore to fulfilling his dreams of meeting and working with Jim Henson, bringing a voice and character to a fluffy red puppet who’s familiar to us all, and now to his role as an executive producer on Sesame Street.

One of the things that struck me while watching it was the story of how Kevin developed Elmo’s character. The first incarnation of Elmo was as a growly, gruff-voiced caveman-like creature who liked to cause mayhem, but it just wasn’t working, and so fellow puppeteer Richard Hunt tossed Elmo into Kevin’s lap and said, “He’s all yours.” Every puppet, he’d been told, has to have one thing that makes them, one characteristic that defines them.

Elmo is love personified. He loves everyone. He’s all about affection: hugging, kissing, holding hands. He’s all about making people feel loved, welcomed, included, appreciated. And that, I’d suggest, is why he’s so popular. It’s why kids love him; it’s why, as Kevin relates, kids in Make-A-Wish-type situations ask for him; it’s why he brings comfort to those in distress; it’s why he brings joy to those experiencing sorrow.

Yes, I’m drawing a lesson from a furry red puppet and applying it to faith.

Because God is love. Jesus is love personified. And we’re supposed to be the same way–that’s what a follower does, right?