[Part 1 of a four-part adaptation of my message, “Our Daily Bread.”]

I remember writing letters to Santa along with the rest of my elementary school classmates, asking for things that we wanted. I don’t even remember what I asked for, but I do remember one year—when I was about 8 or 9—staying up till midnight on Christmas Eve, taking peeks out the curtain to see if I’d spot him—but not too blatantly, in case it scared him away—all the while wondering, “How is he going to get into our apartment when (1) we don’t even have a chimney, (2) we live on the second floor of a twenty-story apartment building, and (3) does Santa even make it to HongKong?!”

Then I got a little older and a little wiser, and grew out of Santa; and I replaced him with God. Only instead of writing letters and asking for toys, I sent prayers and asked that he would make this cute girl I had a crush on like me back. That would be fantastic, thank you very much.

For a long time, that’s all I thought prayer was: Dear God, please could you give me …? In Jesus’ name, amen. Because that’s what I understood from what I was taught and what I saw modeled in the church: prayer was simply asking God for stuff that you wanted. Now to be fair, that wasn’t what people in my church necessarily believed, but that’s the truth that I picked up from what I saw and heard. And I think that’s what a lot of us still believe—you know, I thought about naming this message, “How to get what you want from God,” and while that’s obviously a caricature of how we look at prayer, for many of us it’s not that far off, is it? We’re not quite sure how to understand prayer, and specifically what it means to ask God for things.

Dallas Willard, in The Divine Conspiracy, writes, “Prayer is simply talking to God about what we are doing together.”

So every night before I went to sleep, my dad would make sure to come and talk with God with me. And through that I began to cultivate a relationship with God.

At fifteen, I left home, went to boarding school, finished high school, studied law at university, and got pretty good at looking after myself. God and I sort of lost touch a little, not in the sense that we didn’t get along any more; more in the sense that I just forgot to call. And part of that was related to what I understood about prayer, and also what I understood about myself. There wasn’t a lot that I couldn’t do for myself, there wasn’t a lot that I wanted or needed from other people. (Though I probably did still pray that old prayer on occasion: God, please make this cute girl I have a crush on like me back!)

For the most part, I considered myself to have ‘graduated’ into a pretty self-sufficient, adult walk with God. I don’t need anything from you, God. We can just hang out and relate as grown-ups; what a mutually beneficial relationship we have! Aren’t you lucky to have me as part of your family? (Anyone else think that they knew it all when they were younger?!)

Over the first two weeks of this series looking at the Lord’s Prayer, Aaron took us through “Our Father in heaven” and “Your kingdom come.” This week, we’re looking at “Give us this day our daily bread,” at asking God for things, what’s known as petitionary prayer. Indeed, if you look at it, much of the Lord’s Prayer is petitionary prayer; it’s asking.

Each of these individual points could be books of their own, so I’m going to touch on them a lot faster than maybe we’d like, just throw the seed out there, and see what God grows in us.

How we talk to someone, how we approach somebody, how we request something from someone, differs depending on who that person is, right? If I don’t know you as well, I’m less likely to, for instance, ask you for a favor; or vice versa. We haven’t built up the trust, we haven’t developed the relationship, on which that request can stand. Whereas with my parents or with my brothers or my close friends, I can make a request with confidence, knowing that they know me and that they’re not going to think I’m just trying to take advantage of them.

So it’s important to know what relationship we have with God as we pray; and fortunately, we have the prayer that Jesus taught us to help us: the Lord’s Prayer establishes the relationship first. It begins with being about God before it’s about us; it starts with recognizing who God is: our Father in heaven. 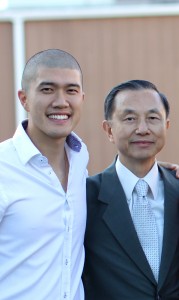 We often just skip over this part in the prayer; it’s just the salutation–just saying “Hey.” Aaron talked about this a couple weeks ago when we kicked off the series, so I don’t want to rehash all of that—and if you missed it, I encourage you to go back and listen to the podcast.

But I will say this: it makes all the difference in the world that Jesus tells us, invites us, to call God “Father,” and he later uses that word “Abba.” When I call my parents back in Hong Kong, I don’t address my dad as “Professor Fung” or “Doctor Fung,” though some people do and he is those things. And when that happens, it always both fills me with pride and makes me laugh, because to me he’s just “Dad.” That’s our relationship; that’s the level of our intimacy; that’s how we relate. He’s my dad.

And in the same way, only on a scale far more amazing and in a way far more mind-boggling, Jesus, in calling God, “Father,” and inviting us to do the same, was opening the door for us to enter into an intimacy with the God of the universe that none had ever known. People in Jesus’ time knew God as the Holy One, the Lord of the hosts of heaven, enthroned on high, unreachable, untouchable, unapproachable; and yet Jesus says, “Come join me in talking with my Father and your Father. Come meet the One who is great and holy, and who is also so loving and intimate and desiring to be involved.”

Now, it’s important not to go too far with this: abba is not the same as just daddy, because in family circles where the term abba was used, what was central to the relationship between father and child was obedience and respect. And so this is the dynamic that we are invited into: a relationship with the God of the universe, who is at the same time more than worthy of our obedience and respect, and yet invites us in to be a part of his family. That’s part of the wonder that is core to our faith: the God of the universe invites us to be a part of his family.

This is the ‘who’ of prayer; this is whom we’re asking: God our Father. For some of us, this is the first step toward prayer: beginning to understand the relationship into which we’ve been invited. Prayer is about relating with the God who is revealed in the person and character of Jesus Christ.

This is whom we’re asking: God our Father.